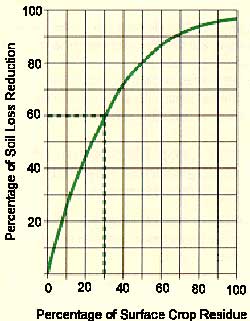 This is a good day to reprint some articles about soil cover. First, from Anne Verhallen, OMAFRA Soil Management Lead for Horticulture. This was originally run in the ONorganic newsletter in 2013.

I recently heard Gabe Brown speak. He is a rancher in North Dakota and is probably best known for his aggressive cover cropping strategy using highly diverse mixtures. One thing he said really stands out though – he said “When we farm in Nature’s image, everything gets easier”. By this he meant farming with diverse cover crop mixtures and keeping the soil constantly covered just as Nature does.

In recent years we have seen a lot more erosion across the province – both wind and water erosion. Just think back to April 2012, we had two Mondays in particular with extended high winds. There was soil moving off fields that typically are not prone to erosion but were bare and open to the wind.

Cover crops are an integral part of organic crop rotations, barring late harvested crops with no window for fall cover crop growth. However, because these systems often rely on tillage to control weeds and cover crops and to prepare a seed bed, there are critical times where the soil is bare. Unfortunately, the bare soil time is generally in the spring after planting. Spring and early summer is also a time of intense rainstorms, making fields quite vulnerable to erosion.

Research has shown that 30% or more cover can reduce erosion by 60% or more, (Figure 1.) This is significant in terms of keeping soil in place and maintaining overall soil health and productivity.

Beyond erosion protection, there are other benefits from 30% cover. Cover, particularly with a density greater than 30%, can help with weed control. Another key benefit is soil temperature and moisture moderation. Bare soil is somewhat like a desert. The surface layers dry out readily and are prone to wide temperature swings between day and night. In early summer, dry, bare soils like sands can easily get above 40oC during the day. Much of the life in soil, for example the bacteria that drives the nitrogen cycle, is highly sensitive to temperature fluctuations. The optimum temperature range for most biological processes is 20-30oC. Keeping soil covered can help to moderate temperature changes and support more active cycling.

It is a challenge to achieve 30% cover at all times – let’s consider the options.

Sometimes we have to accept the trade- offs. In some crop rotations or seeding systems it can be very difficult to achieve 30% cover. Aim for 30% cover but also recognize that at least 90% of the time your fields are covered and that there are just a few weeks after planting and between cover crops where the soil may be bare and vulnerable. Work to ensure that cover crops are planted promptly and seed densely to achieve fast ground cover.

* Use higher values for corn residue and lower values for fragile residue, such as from soybeans.
Adapted from a chart in the Purdue Extension publication – Estimating Corn and Soybean Residue Cover at http://www.extension.purdue.edu/extmedia/AY/AY-269-W.pdf

A non-organic system (Figure 2) – in organic, similar could be achieved with the use of a dense oat cover crop from the previous year.