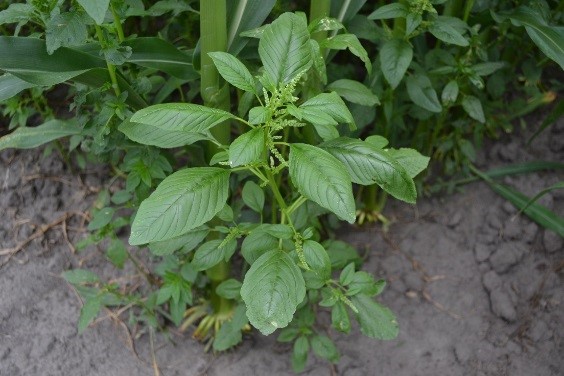 Waterhemp (Amaranthus tuberculatus var. rudis) is a relatively new weed in Canadian agriculture cropping systems1. It has been suggested that it was introduced via a combine from the southern United States between the late 1990s and early 2000s in Ontario1 and similarly to Quebec in 2017.

Waterhemp is a small seeded, summer annual, broadleaf weed with many traits which make it particularly troublesome in agriculture2:

An Amaranthus genetic test has been developed to differentiate between 6 species (green pigweed, redroot pigweed, palmer amaranth, smooth pigweed, tumble pigweed and waterhemp), and can be used if identification is uncertain.  A pigweed species identification guide has also been developed.  Contact kristen.obeid@ontario.ca for either resource.

Waterhemp has the potential to become one of the most problematic weeds in Canada, as it is in the United States corn belt.  It is easily spread to new areas as a contaminant of seed or hay, as a hitchhiker on vehicles or equipment and through natural dispersal by water and wildlife4.  Once established, waterhemp will thrive in many agricultural production areas due to its prolific seed production, extended emergence pattern, high genetic diversity and its current documented herbicide resistance to Groups 2, 5, 9 and 14 (Ontario and Quebec) and Groups 2 and 9 (Manitoba).

The authors gratefully acknowledge the contribution to this work from agronomists, extension personnel, technicians and students.  As well as, previous graduate students L. Benoit, B. Hedges and M. Schryver.

0 comments on “Waterhemp: A Spreading Invasive Weed in Ontario and Canada”