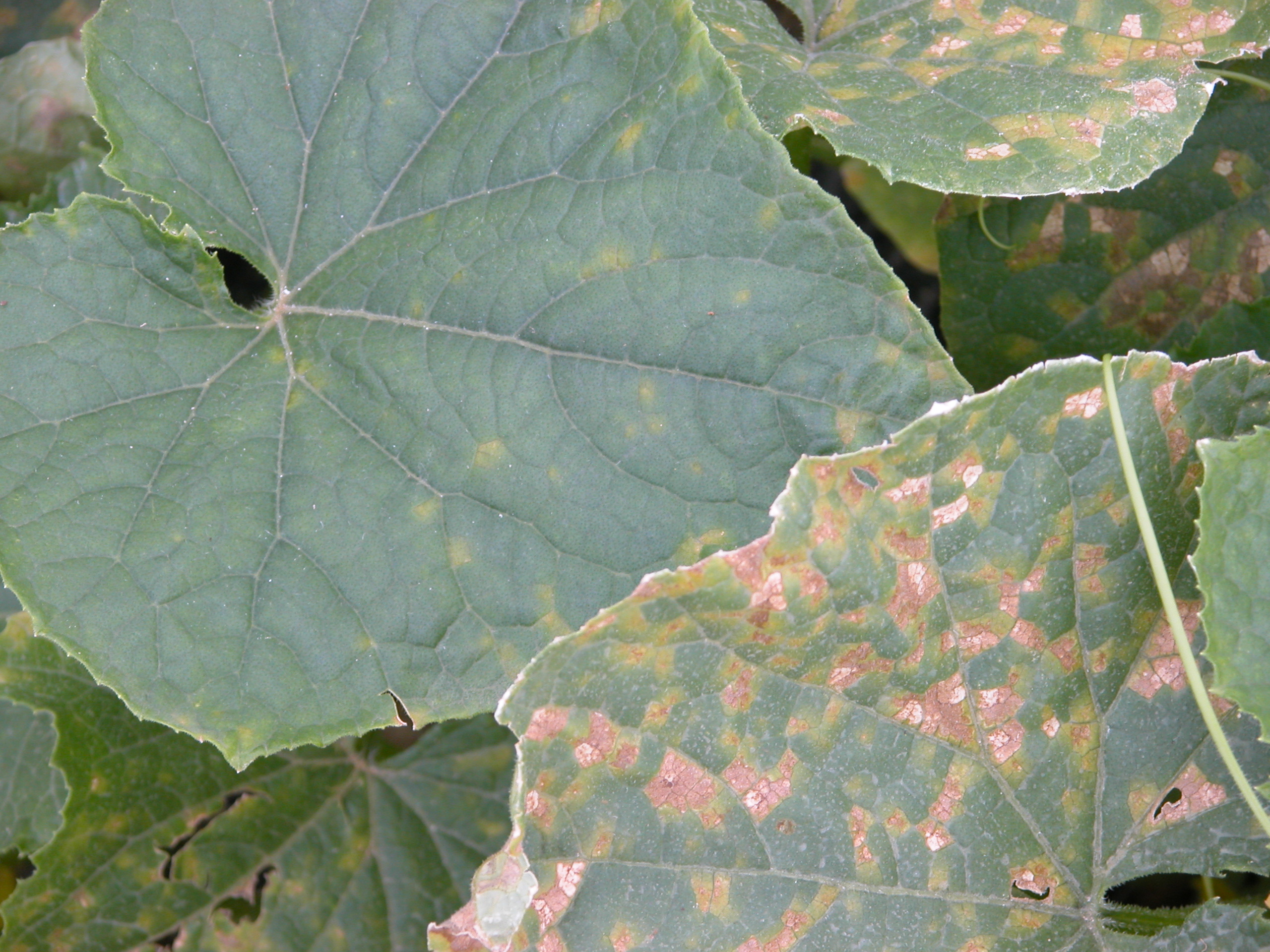 Cucurbit downy mildew has not yet been identified in Ontario or the Great Lakes region in 2022 but has been identified in New Jersey on June 11 so growers should be on high alert and scouting often for this disease. Cucumber and muskmelon crops are the most susceptible, especially if there is rainfall, extended dew or heavy overhead irrigation.

If you suspect downy mildew in your field, send for confirmation immediately. Contact one of the OMAFRA specialists listed below if you have any questions about detection or management.

What to look for

Downy mildew symptoms first appear as water‑soaked lesions on the topside of leaves. The lesions can start anywhere in the canopy. These initial lesions are best seen during a heavy dew. The centre of the lesion then turns yellow (chlorotic) and eventually tan or brown (necrotic) (Figure 1). In cantaloupe, lesions appear irregularly shaped (Figure 2). As the disease progresses, lesions expand and multiply, causing foliage to become necrotic, and leading to plant death.

Under humid conditions, a downy growth that resembles “dirt” often develops on the underside of the initial water-soaked lesions. This growth on the underside of the leaf can occasionally be seen before any symptoms on the upper leaf (Figures 3 and 4). This downy growth is particularly noticeable in the morning after a period of wet weather or when conditions favour dew formation.

Downy mildew can be commonly confused with angular leaf spot (Figures 5 and 6). Angular leaf is caused by the bacteria Pseudomonas syringae pv. lachrymans. It is important to distinguish between the two, as the management strategies are different. Angular leaf spot will not have the black growth on the underside of the leaf, so being able to scout of the initial lesions where this growth is still visible is very important when it could be either downy mildew or angular leaf spot infecting the crop.

Michigan State University annually conducts spore trapping and reports their findings here. Dr. Hausbeck’s lab is reporting the clade associated with each spore detection. Clade 1 infects pumpkins, squash and watermelons and is not a concern most years in Ontario. Clade 2 infects cucumbers and cantaloupe and is seen annually in the region. Clade 2 spores have been identified in Michigan on June 2, 2022.

Under higher risk conditions, refer to Table 2, Downy mildew specific fungicides. For late crop cucumbers, be prepared to begin the preventative fungicide program soon after crop emergence. Banded applications on small plants greatly reduces the cost of the fungicide program. Trials in Michigan and Ontario have shown the three most consistently effective downy mildew fungicides are Orondis Ultra, Torrent and Zampro. New for 2022, Allegro (fluazinam – FRAC group 29) is registered for downy mildew suppression/control in cucurbit crops. However, use is restricted by the 30-day pre-harvest interval.

See crop labels for listed cucurbit crops registered on the products below. For more information, refer to the Ontario Crop Protection Hub

High risk downy mildew conditions include downy mildew has been identified in the Great Lakes Region, prolonged periods of cool, wet weather, cooler night-time temperatures and heavy dew fall followed by warm, windy days and extended periods of leaf wetness due to dew, rain or overhead irrigation. Apply a preventative fungicide before a rainfall event or prior to overhead irrigation.

*resistance is known to the group 40 fungicides, mandipropamid and dimethomorph. Only the premix partners oxathiapiprolin and amectortradin in Orondis Ultra and Zampro, respectively, are effective on downy mildew.

1 comment on “Cucurbit downy mildew – get out and scout!”