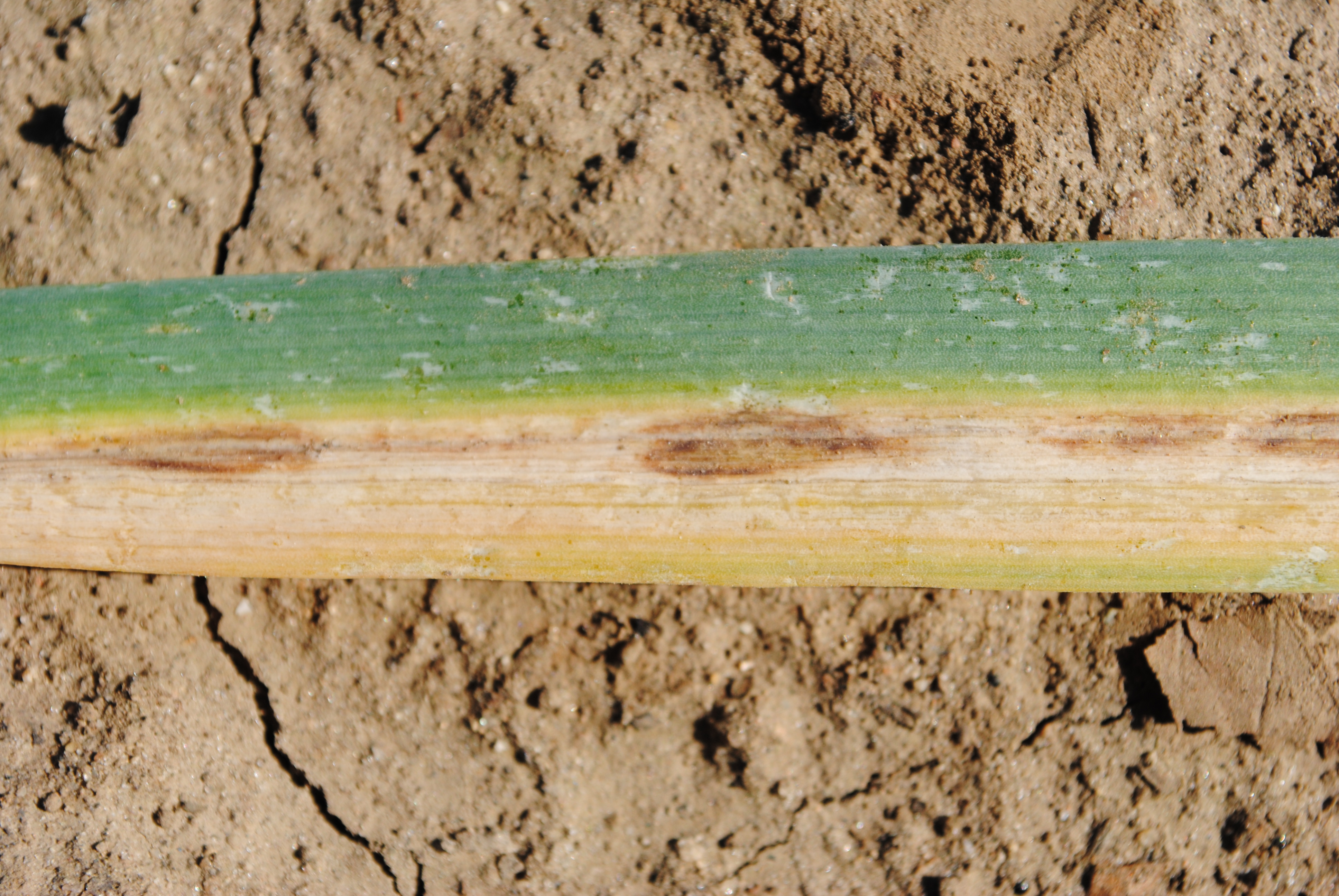 Stemphylium leaf blight (Stemphylium vesicarium) of onion starts as yellow-tan, water-soaked lesions developing into elongated spots. As these spots cover the entire leaves, onions prematurely defoliate thereby reducing the yield and causing the crop to be more susceptible to other pathogens. Stemphylium was first identified in Ontario in 2008 and has since spread throughout the Holland Marsh and other onion growing areas in southwestern Ontario.

Stemphylium spores are dispersed by wind. Spore sampling at the Muck Crops Research Station using a Burkard seven-day spore sampler detected an average of 33 spores/m3 in 2015 and seven spores/m3 in 2016. In ideal conditions, leaf spot symptoms occur six days after initial infection. Stemphylium tends to infect dead tissue or wounds, often as a result of herbicide damage, insect feeding or from extreme weather. Older onion leaves are more susceptible to infection than younger leaves and symptoms are traditionally observed after the plants have reached the three- to four-leaf stage.

Over the last few years, Botrytis leaf blight (Botrytis squamosa) has become less of an issue and has been overtaken by Stemphylium as the most important onion disease  — other than maybe downy mildew. This may be because the fungicides used to target Stemphylium are likely managing Botrytis as well. Since Stemphylium can be so devastating and hard to control, fungicides are now being applied earlier in the season which may be preventing Botrytis to become established. Botrytis squamosa  overwinters as sclerotia in the soil and on crop debris left from the previous year and infects onions in mid-June when temperatures and leaf wetness are favourable for infection. In the Holland Marsh, Stemphylium lesions were first observed on June 29th in 2015 and July 7th in 2016.

The primary method of management is through foliar fungicides such as Luna Tranquility, Quadris Top and Sercadis. Keep in mind that Sercadis and Luna Tranquility both contain a group 7 fungicide so remember to rotate and do not make sequential applications. The effectiveness of these fungicides in the future depends on the spray programs you choose today. There are already Stemphylium isolates insensitive to several fungicides in New York so resistance is a real and very serious issue with this disease. Remember to rotate fungicide groups with different modes of actions to reduce the possibility of resistance. A protective fungicide is best applied when the onion crop has reached the three-leaf stage, however it may not be necessary in dry years.

Research is currently being conducted at the Muck Crops Research Station to improve forecasting models to identify the optimal timing for commercial growers to achieve good control. BOTCAST disease forecasting model is available in some areas of Ontario to help growers predict the activity of the disease. Warm, wet weather between 18-26°C is most favourable for disease development. Regular field scouting is still the best method to assess disease levels.

Plant spacing that permits better air movement and irrigation schedules that do not extend leaf wetness periods may be helpful in some areas. Recent work at the Muck Crops Research Station has shown that spores increase two to 72 hours after rainfall with eight hours of leaf wetness to be optimal for the pathogen. Irrigate overnight if possible so by morning the leaves can dry out and you don’t prolong that leaf wetness period.

To lower inoculum levels it is crucial to remove or bury cull piles and to bury leaf debris left from the previous year’s crop through deep cultivation. Stemphylium of onion has many hosts including leeks, garlic, asparagus and even European pear. Take the time to rogue out volunteer onions or other Allium species in other crops nearby and remove unnecessary asparagus or pear trees to lower inoculum levels. As with any other foliar disease of onion, it is beneficial to rotate with non-host crops for three years.

To prevent the development of resistance, it is essential to always rotate between different fungicide groups and/or tank mix with a broad spectrum insecticide. Current products registered for Stemphylium leaf blight of onion are listed by fungicide group below:

0 comments on “Stemphylium is the new Botrytis”