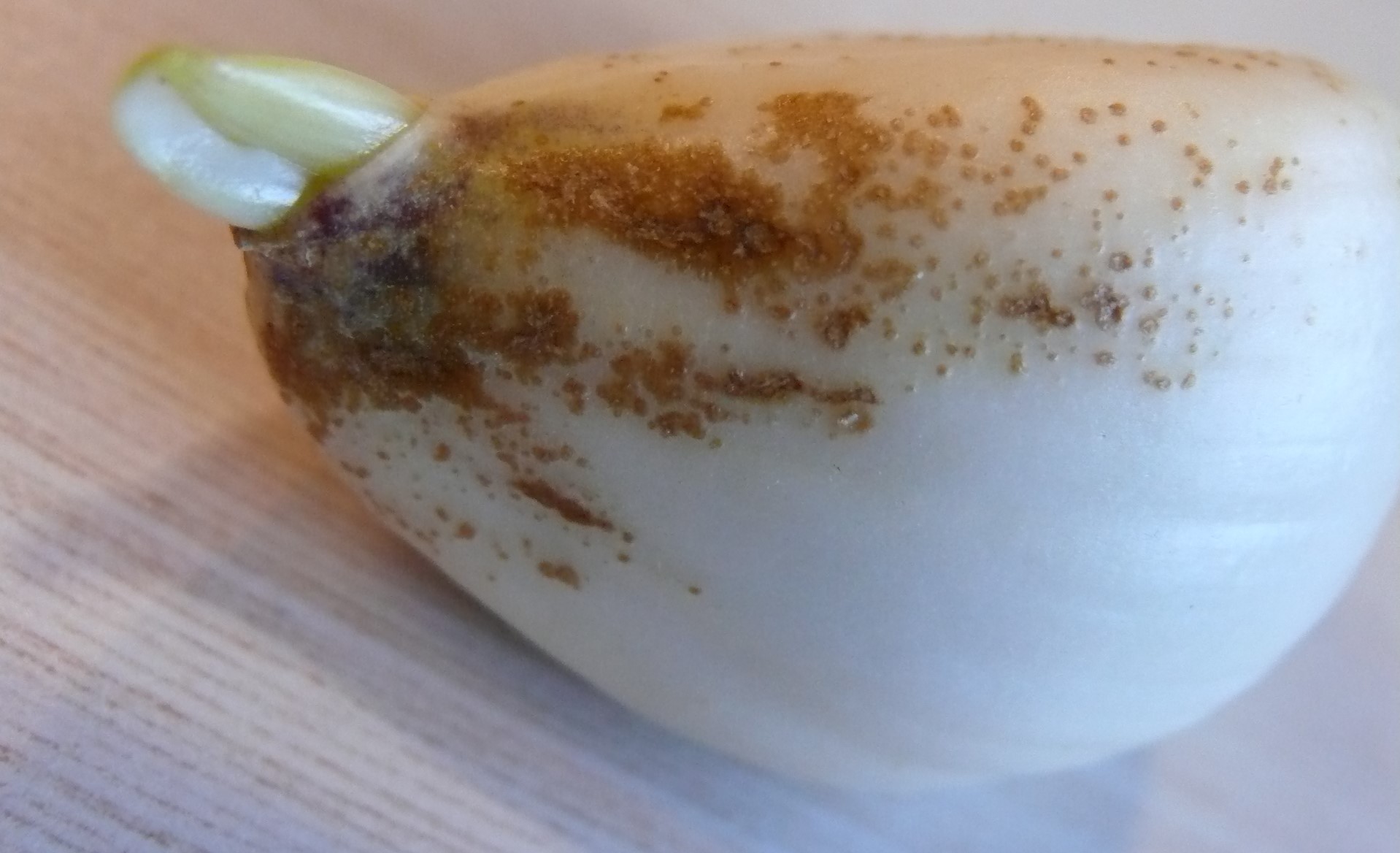 Garlic was harvested back in July and over the past five months bulbs have either been cracked for planting, sold for consumption, or stored for later sales. This year, many bulbs coming out of storage have very small brown spots on the garlic cloves visible once the bulb wrapper and paper layers around the clove are removed. At first glance these spots may look like small fungal lesions starting, but if you have a hand lens or magnifying glass you will likely find bulb mites living between the paper wrappers of the clove. These spots are actually scars left behind from past feeding damage from a tiny bulb mite.

The raised scars are from mites known as Acarid bulb mites (Rhyzoglyphyphus spp., Tyrophagus spp.) (Figures 1 & 2). While cloves with bulb mite scars are still OK to eat, these cloves often dry out or desiccate quickly in storage. The bulbs can also quickly become unmarketable as these mites can move around storage pathogens like blue mould and fusarium.

There are also tulip dry bulb mites (Aceria tulipae), which are tiny, white, carrot-shaped (0.2-0.3 mm in length), and live in colonies containing several hundred to thousands of individuals. These mites feed on all parts of the plant, and, cause sunken brown spots on infested cloves (Figure 3). Plants infested with tulip dry bulb mites often develop curling and yellowing leaves that can resemble symptoms of a virus. The colonies themselves can appear as white spots or patches on garlic leaves (Figure 4).

The majority of mite damage that is being seen in storage this year is from Acarid bulb mites. These mites overwinter on fall-planted garlic cloves or in crop debris that have yet to break down. Throughout the growing season, these mites survive on other crops besides garlic including corn, grains, Brassicas, or grass cover crops. If bulb mites have been an issue in the past, garlic can be followed by legumes, carrots, beets, leafy greens or Solanaceae crops like tomatoes, potatoes, peppers or eggplant.

Avoid using garlic infested with bulb mites for planting stock. There are no miticides or insecticides registered for control of mites on garlic. The University of California Agriculture and Natural Resources IPM Program suggests that a hot water bath of 53°C for 10-20 minutes may kill the mites and their eggs, but this is a risky technique that can damage the germination rate of the cloves. If a hot water bath is used, water should remain at a uniform temperature throughout the vat, and cloves should be planted immediately after the treatment.

Bulb mites are a common issue across regions that experienced a high ambient relative humidity around the time that garlic was harvested this year. The most effective way to control bulb mite infestations is to cure the crop quickly after harvest. Lower levels of bulb mites are seen when bulbs are cured quickly (48-72 hours), as opposed to a passive air system that takes seven or more days.

Curing / drying is often associated with an increase in temperature, however, when it comes to curing garlic, relative humidity should be the primary focus. Heating air increases the amount of moisture that the air can hold per cubic metre. A cubic meter of air can hold ~17 grams of water vapour at 20°C, while at 30°C it can hold ~30 grams. In most years, when the ambient air’s relative humidity is low, increasing the temperature greatly increases the water holding capacity of the air. This year, the air was humid, and already close to being saturated. Therefore, increasing the temperature of the air did not add much more water holding capacity. As a result, it took a longer amount of time to remove excess moisture from the crop.

Bulb mites are better able to survive a slowly changing environment where the moisture is slowly pulled from the crop, so they have difficulty surviving a rapid cure. To achieve a rapid cure, dehumidifiers or even air conditioners can be used to quickly remove moisture from the air. A quicker cure should reduce mite populations, and a spike in temperature for an hour during a cure may be able to completely control them. Work conducted by Courtin et al., (2000) showed that a survival of A. tulipae eggs increased as relative humidity increased. They found that A. tulipae eggs were killed by heating the garlic for one hour at 45°C. It is likely that this would also hold true for Acarid bulb mites, but is important to ensure that the crop always remains under 49°C as high temperatures combined with poor air circulation or low oxygen levels can result in a waxy breakdown in storage.

Good air circulation through totes, pallet boxes or baskets that reach all bulbs evenly will help to reduce over-curing some bulbs or under-curing others. Curing is complete when the bulb wrappers are crispy, the middle of the cut stem is hard, and the base of the stem is dry when cloves are removed. A shorter cure period focusing on reducing the relative humidity is key to avoiding bulb mites in the future.